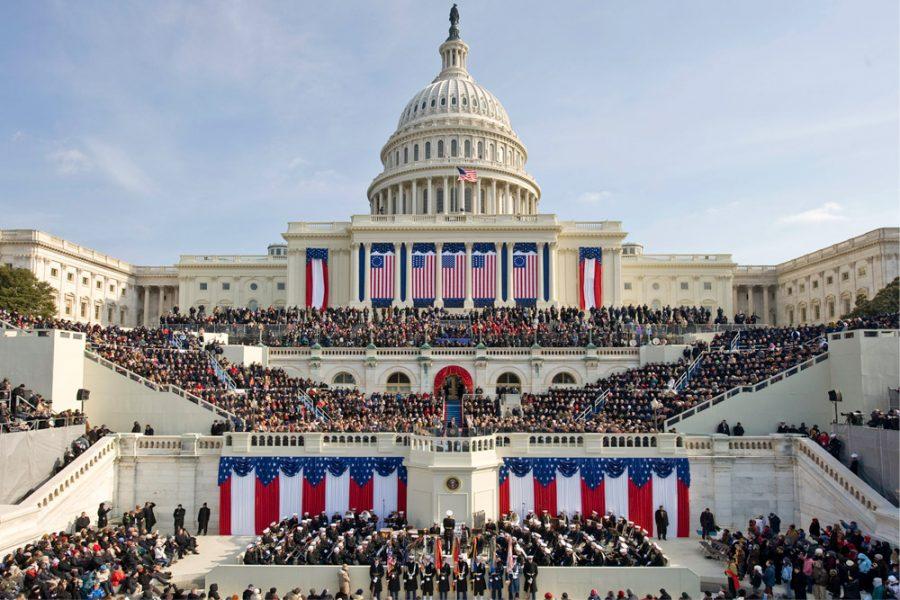 Inaugurations only come around every four or so years, so they are made grand celebrations. The public looks forward to seeing something interesting or exciting. It becomes interesting when something goes wrong, even if it is the tiniest slip.

Here are some interesting things that have happened at past inaugurations.

William Henry Harrison holds the record for having given the longest inaugural address with an astonishing 8,495 words. For the entire one hundred or so minutes it took to give the speech, Harrison did not wear a hat nor a coat. Perhaps because of the cold, rainy weather of that day, or perhaps some other reason, Harrison caught a cold, got pneumonia, and died within a month of his inauguration.

At Abraham Lincoln’s second inauguration, his soon-to-be assassin was in the crowd, partaking in the festivities. John Wilkes Booth can be seen in pictures close to the President.

Theodore Roosevelt wore a ring with a lock of Abraham Lincoln’s hair in it during his second inauguration. He had looked up to Lincoln since his childhood. Roosevelt was gifted the ring by John Hay, Lincoln’s former personal secretary.

At his first inauguration in 1789, George Washington added the phrase “So help me God” to the end of the Presidential oath. The actual oath as written in the Constitution only thirty-five words. Other presidents have also decided to include the phrase in their oath.

George Washington is also known to have the shortest inaugural address at just 135 words. This was at his second inauguration.

In 2009, Chief Justice John Roberts messed up the oath and put the word “faithfully” in the wrong place. Some people were concerned that Barack Obama was not sworn in properly and could not be legally recognized as President. To get rid of any more doubt, Obama took the oath again the next day in private.

For his second inauguration, President Ulysses S Grant thought canaries would be a nice touch to the ceremony. However, he did not think about the freezing temperatures. As should have been expected, about one hundred birds froze to death.

After Andrew Jackson’s inauguration in 1829, a party was thrown at the White House. The wild party was of a rough crowd that broke furniture and china. Apparently, the people had to be lured out with punch or whiskey. However, some people say that the party wasn’t wild and Jackson’s enemies fabricated that lie. So, it is still unsure whether Jackson had to escape the party, either by jumping out of a window, or being escorted out quietly by his staff.

When President Herbert Hoover was sworn in, William Howard Taft messed up the oath and replaced the word “protect” with “maintain.” Helen Terwilliger, an eighth grader, caught the mistake and sent a note to Hoover. Hoover denied that there had been a mistake in a letter to the girl. Eventually, Hoover admitted he was wrong.