Vegan Dessert Shop You “Donut” Want To Miss Out On 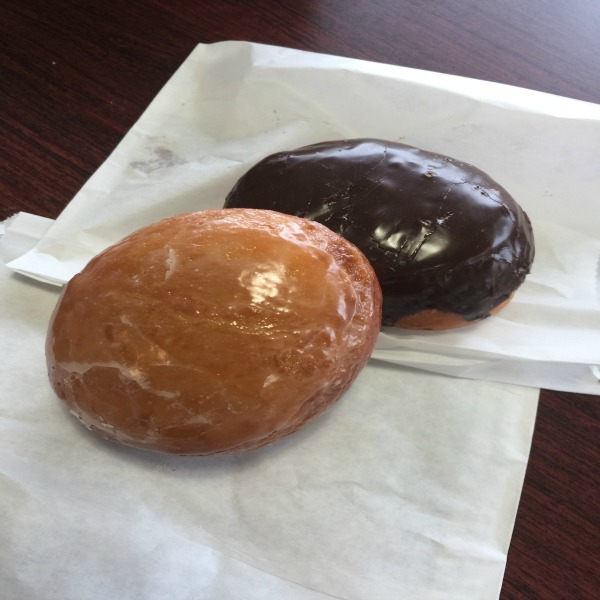 Rain fell from the sky on Saturday morning, otherwise known as the day my friend, Karly, and I ventured towards “Vegan Donut Gelato,” a new doughnut and gelato shop that lies on Needham Street in Modesto, California.

It’s odd observing the word “vegan” next to such delicious (and cream-based) items such as doughnuts and gelato. Yet, the bakers stay true to their name as there is a lack of milk, eggs and any other animal product within their food; everything remains plant-based.

Upon entering, the “doughnut-y” smell inundated my senses, the aroma was enough to make my mouth water and considering I did not consume breakfast that day, I believe it was socially acceptable.

It was then that a man (who’s name I later discovered was Sam) behind the counter greeted us with a genuine smile.

As Karly and I were observing the abundant amount of doughnut options, Sam asked us from where we discovered their shop, so I then responded by telling him I stumbled upon their business in The Modesto Bee. I later revealed my enrollment in a journalism class in which I was writing a review on his shop.

He kindly informed us on the prices of the doughnuts and then the time had arrived for us to make our decision. Karly selected a jelly-filled doughnut, while I chose a cream-filled chocolate coated one.

Excited was an understatement; we ate half of the ones we purchased and then switched so we had the opportunity to try both. Cognizant of how crucial milk is in the production of chocolate, we were skeptical of how it would taste, yet we were proven wrong. The chocolate glaze that lied so beautifully upon the cream-filled doughnut tasted exactly as a normal doughnut would.

Mid-bite into the jelly-filled doughnut, Sam came over and asked if we were okay and if we needed anything. After telling him we were good and thanking him, he walked over to the other two tables and inquired the same. He struck up a conversation with one of customers, in Spanish I might add.

Since Karly and I promised our mothers we’d buy them a doughnut, we made our way back up to order more. I joked around with Sam by saying “Hey! We’re back!” It was then he offered me to sample some of the gelato. How could I say no to that?

Considering the gelato is plant-based, Sam told me it wouldn’t be as creamy as normal gelato should be, but it did not signify it would be any less delicious.

I first sampled the blueberry one and was not disappointed, the blueberry flavor proved impeccable. The mint-chocolate chip gelato was okay, but I normally don’t love mint products in general. The last flavor I tried is my favorite kind, cookies and cream. I know it’s not “real” chocolate, but it might as well have been.

I thanked Sam again for allowing me to try the gelato and told him that Karly and I would definitely be coming back, he smiled and said thank you.

On our drive home, we agreed that our stomachs didn’t feel as upset or bloated as they do after eating normal doughnuts, one of many perks.

So if in Modesto and a sweet-tooth is kicking in, “Vegan Donut Gelato” will hit the spot (and maybe one won’t feel as bad about eating so many since they’re vegan!)