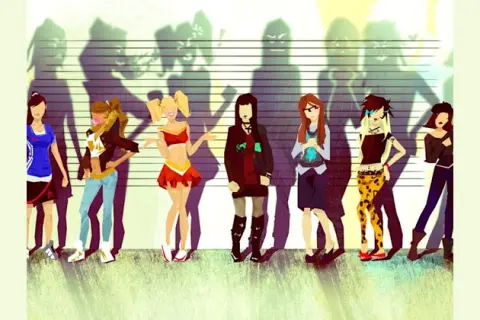 When people think of high school, they often think of a select group of cliques, with every student appropriately sorted into their one and only stereotype. However, these straightforward and clear-cut stereotypes that come to mind when one thinks of highschool are evolving. Teenagers are no longer just one thing. In fact, they are straight-up refusing to fit into their molds. Scary.

While this evolution may seem like a scary change, the world must continue to progress; stagnancy is not an option, and progress must start somewhere.

Not to mention that kids not wanting to fit the mold is nothing new. We have seen culture rebellions consistently throughout history, and all of them, whether productive or not, have moved the world forward and influenced our culture.

The most common of the stereotypes are jocks, cheerleaders, popular/mean girls, nerds, slackers, geeks/gamers, and outcasts but the list is endless with everything from student-athletes, to troublemakers, to “cool kids”, to performing arts kids, to gangsters.

The origins of stereotypes such as this are often found in popular culture and, consequently, society. For instance, classic- and also very popular- high school movies like:The Breakfast Club, Clueless, Easy A, Mean Girls, and Sixteen Candles all contain and focus on at least a few of the stereotypes listed above.

These origins have only been intensified by the modern era’s even easier access to stereotypical representations of high school students. A quick google search can bring nearly 10 million different websites straight to your fingertips, all expressing the same idea in the form of everything from ranked lists to BuzzFeed quizzes.

In the past, most high schoolers would identify with just one of these stereotypes, thus perpetuating their existence. However, teens are beginning to care less about there being a concrete division between cliques. Hence why Sophomore Colton Salsig feels comfortable being in both drama and on the varsity football team.

“I feel like I can fit into a couple [stereotypes] in a sense,” he remarks when interviewed on the subject.

Salsig also discusses how his personality morphs to the stereotype he is interacting with, saying “When I’m here in drama, I can let out another side of me…before I go to football practice and that’s I guess where I’m a completely different person.”

Having this sort of “chameleon-like” attitude towards cliques is becoming more common among younger generations and is destroying the idea of a stereotypical high school student along with it.

On the harmless side of things, stereotypes may form naturally just based on the differences and commonalities between the interests of kids on campus.

But either way, the truth remains that the stereotypes, despite the progress and gradual move away from them, are still a major aspect of high school life and general teenage culture.

These stereotypes are so difficult to uproot because they are so ingrained in our subconscious from years of subliminal messages saying that they matter and that fitting into one of them is the only option. This idea is ingrained in some more than others.

Students everywhere still hold on to this idea because as Salsig discusses, “Some people are more self-conscious than others or care more than others.”

While progress is ultimately being made, we still have a long way to go to get away from the unmistakable stereotypical representations of high school students and the subsequent idea that they must conform to them.