Failing Isn’t As Bad As You May Think 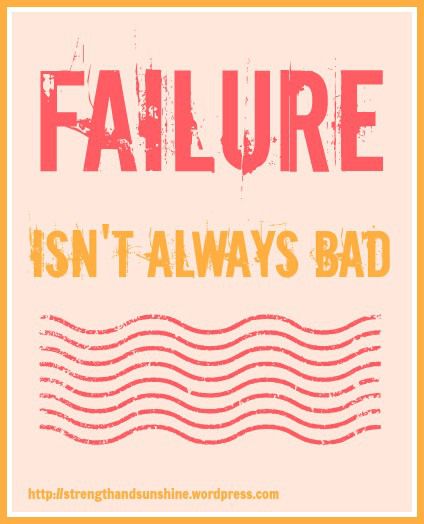 A lot of times in our society we tend to believe failure is the end of the road. When we mess up on the job, get a bad grade in school, or mess up in a relationship. When these things happen we may feel as if we lost the thing we want most, but really it is nothing like that.

Failure is just a learning curve. A turn in the road where we learn from the mistake we made in the past. Don’t let a small mistake determine your lives outcome. Life is a learning experience and everyday we will learn something new. You may consciously not realize that it happens, but really every single thing you do you learn something from it. You’ll make many mistakes in your life because that is just what humans do, but don’t let the situation where you make one mistake define everything.

Failing isn’t the end of it. It may feel like the end, but when you fail at something don’t look at it as a loss. Reflect and do something in the future to make sure that you don’t do it again or to try and improve on what you were doing. Like maybe you tried to do a backflip, but you fall and mess up feeling embarrassed. Now don’t let that one fall keep you on the ground, step up and keep going. Make everything as a win but be self-aware about it. Meaning that when a problem does happen don’t just ignore that you messed up, but realize what you did and strive to do better. Be honest with yourself.

You may also be doubted by many people in life and get judged by the things you fail at, and they can keep judging and judging. What they say doesn’t matter at all. Everything you are doing is better than what they are doing. You are growing as a person, and mentally you will succeed more than those who doubt. They will always judge, but don’t feed into it unless you want a response. The more you allow that negativity to affect you, the longer that person will stay and try to bring you down.

The main message I am trying to give is that failure shouldn’t be the defining point for you to stop pursuing your dreams, try to just grow and the next time you face that situation just look at it in a different perspective.

There are many successful people in the world though, and many of which failed before their success. So do not let yourself get down and stop the capabilities of you becoming successful. At the beginning of  Walt Disney’s career he was fired from his job because he supposedly “lacked creativity”. Now this could have hurt him and been the end of his career if he took it too close to heart, but instead he continued to pursue his dream, and continued doing what he loved. He improved himself greatly and in the end went on to have 59 Academy Awards, and became known as the greatest animator.

Another successful person, Gary Vaynerchuck, a very successful entrepreneur who owns many companies that have become very successful. He shares advice to others about the business world. He has a lot of experience in entrepreneurship. He has this to say about how failure is actually important for people, the question asked is,” But is it hype? Is failing really that important? Should you believe it?” His response to the question was,” Sometimes you have to take 10000 punches before anything good develops. Miracles don’t happen. If they do, it’s one in a million. You have to work, you have to put yourself out there. And with work comes disappointment-” Just knowing that failure is actually more beneficial for the long term growing process is a thing many should keep in their mind, and always keep with you. It will forever make the things you do better because you will just continue to grow and grow till one day you become successful with what you do.

The last person I want to acknowledge is Oprah Winfrey, another successful person I’m sure many of you know. She has been very successful and she started out born to a teenage mother, whom had low income. She grew up in a family with low income, but she worked and worked and then got a TV job, but it ended fast, and she was told she was “unfit for television”. Instead of turning this to the end and her point of quitting because she definitely could’ve but instead she didn’t quit and she kept pushing to do what she wanted to do. She has become a very successful business woman in America.

Now that you’ve seen all of the people who have failed or given advice on failure. You should now see that instead of being hurt by failure just grow from it, grow from the experiences you have and just become the person you want to be. In the end just take everything and learn a lesson from it. It will help you push to the end to get what you truly want.