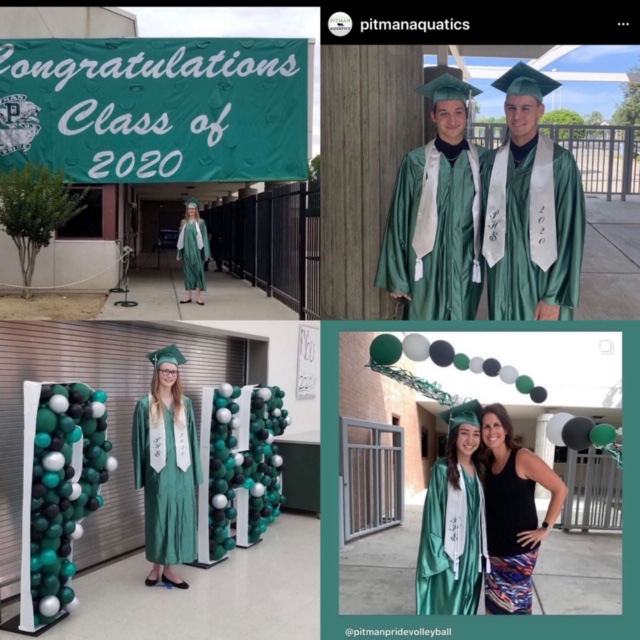 High school is officially over for the year, and officially over forever for us seniors. Never did I think that I would be spending my last months of high school not actually attending it. With the spreading of the coronavirus and the closure of schools, this is the reality for all seniors across the nation. In consequence, seniors will not be getting a graduation ceremony. As disappointing as that is, many high schools have tried to remedy this.  Some have decided to reschedule (though that seems unlikely in light of recent developments), while others have opted for virtual graduation. Pitman, in response to this predicament, has opted for a virtual graduation ceremony.

Since the campus was closed before cap and gowns were picked up, the school set up an event in which the students could do so via drive-thru pick up. Among the items, besides the cap and gown, students received a prom memento, a  Pitman yard sign, and instructions for virtual graduation for the class of 2020.

Students were told that graduation would be held over a few days, during selected times. Each “ceremony” had a limited group of people. Students signed up for their selected date and time through the Pride Time website. Students were allowed to bring two household members for the event and were required to bring masks.

Upon arrival at the school, students and their family members checked into the event at a table set in the front of the school. The check-in provided students with any cords and stoles that they had merited.  That was the first stop at the many “stations” that the school had made. Family members and students had to be six feet apart from each other at all times. On the floor, staff had made duct tape Xs to mark the spots in which people should stand.

The next stations were held in the cafeteria. Walking in, there was a live zoom meeting projected onto a screen. The zoom meeting consisted of teachers who were there to wish the graduates congratulations. Each student had some time to exchange greetings with them. After that, a photographer took individual senior pictures.

Moving out of the cafeteria, graduates and their families move on to a line leading into the gym. Eight graduates, along with their family, were allowed into the gym at the same time. Inside, each graduate had to stay on an X, keeping everyone six feet apart. There was a stage where the graduates were to walk across, one at a time. On top of the stage was a podium where a staff member read the name of the graduates. After having their name called, students walked across the stage, grabbed a diploma (which students grabbed from a table in front of Principal Freeman), and stopped briefly for a picture.

Finally, after the picture, students walked off the stage and left their diploma on a different table. Walking out, students are led to the exit next to the library. Next to the exit, staff members were at a table, to give graduates a final congratulations, a goodie bag, and a cupcake. The goodie bag contained a pack of caramel M&Ms a “Pitman” cookie, and several coupons from local businesses. They were a nice gesture. With that, Pitman’s graduation was over.

Though the ceremony was quick, the hard work put into it was much appreciated. It was apparent that a lot of thought and care went into it. Seniors all across the nation aren’t able to have their long-awaited graduation ceremony. Despite that, thanks to the efforts of our school staff, we Pitman seniors got one—though unconventional. Pitman worked hard to work with what could be done, in light of the current situation. For that, I thank Pitman and all who made the graduation ceremony possible. Thank you for your efforts, thank you for caring.