The Roaring Times • 11 May, 2021 • https://www.pitmanroaringtimes.com/2021/05/police-brutality-against-commissioned-army-officer/ 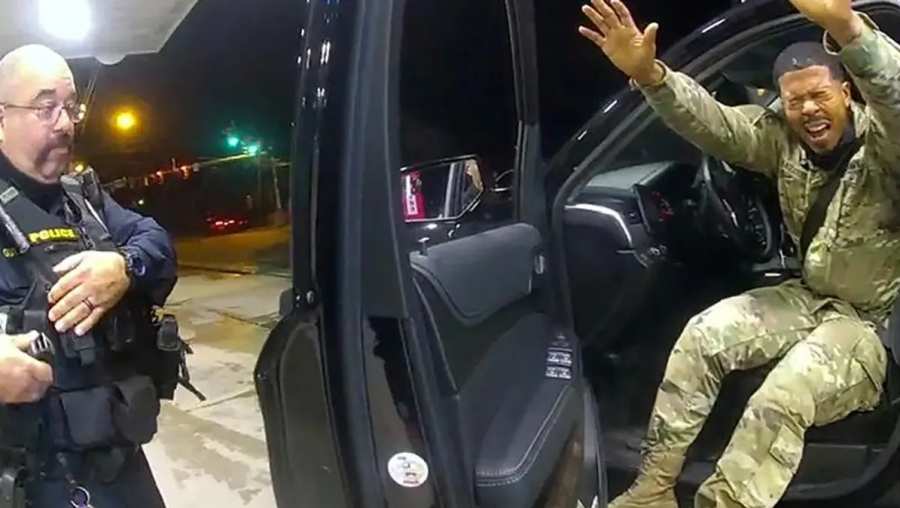 The movement towards raising awareness, documenting, and protesting against police brutality has always been a sad integral part of the culture of the United States. From the Civil Rights Movement in the 1950s-60s, the LA Riots in the 90s, all the way to the current Black Lives Matter Movement of today.

The racial tensions in the country have always been on thin ice, but with current events such as the brutal asphyxiation of George Floyd in May of 2020 and the 2021 killing of Duante Wright, the issue of systemic racism and racial bias in the police force has become larger than ever.

This brings me to the situation at hand that upset me, the case of police brutality that happened to commissioned Army officer, 2LT (second lieutenant ) Caron Nazario.

2LT was driving his newly registered vehicle, which due to it being new he did not have a plate on it, but had the plate in his windshield. Back in December of 2020 the Army officer was informed to be pulled over by the Virginia police, but he did not know as to the reason why. 2LT Nazario had a valid reason to be nervous about pulling over, as his uncle Eric Garner was brutally killed by being locked in a chokehold for several minutes back in 2014, as well as Nazaro being a man of African and Latin descent.

So to make sure that if anything happened to him that it was seen, he slowed down to the pace of about a mile and pulled over to a well lit and populated gas station. This is where the true brutality came in.

The police stepped out of their cruiser under the protocol of a felony stop (any stop of a vehicle that contains a driver or passenger suspected of having committed a serious crime or who’s wanted on an outstanding felony warrant), weapons drawn and ready. 2LT Nazario had his hands outside his vehicle and displayed calmness and compliance. When 2LT Nazario calmly asked as to why he was being pulled over, he was only met with a cop macing him about 4 times directly in the face, to which Nazario somehow managed to keep his composure. Nazario displayed clearly that he was not going to make a movement with his hands period, as he was getting conflicting orders to stay put and get out of the vehicle.

“Im honestly afraid to get out of the car.”

“Yeah, you should be”

Is this an okay way for not only men of color, but a man of color who commissioned as an officer in the military of your country to be treated?

After the encounter, the police then de-escalate their own escalation and tell 2LT Nazario that the stop was only for his plates. They then proceed to threaten to jeopardize his military career if he sent out the video. The video had not been publicly released until April of 2021.

This video particularly struck me, as I am a man of color who is also planning on commissioning as an officer. I already lacked a trust in the police, but this further validated that thought process to such an unbelievable extent. Even a person in uniform that is in the nation’s armed forces can be seen for ONLY their color.

Even in green the police can only see brown.

If 2LT Nazario had not made the active attempt to make sure he could be seen, he very likely could have been murdered and ended up just another name to the depressingly long list of people of color murdered by the police.

I saw myself in 2LT Caron Nazario, that’s what upset me the most.