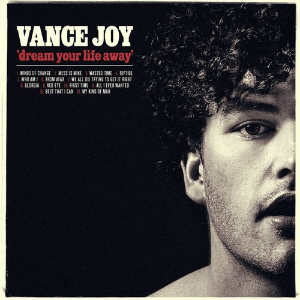 If you are into artists such as Train, Bon Jovi, or George Ezra, then Vance Joy and his album “Dream Your Life Away” is for you. This album is a very folk-rock indie album. I’m sure we have all heard of his song Riptide. If you haven’t, where have you been? Honestly! His album “Dream Your Life Away” is an album that he released on March 22, 2013. It’s an old album, but it’s definitely a chill, go-to album for when you are just doing homework, and you don’t want to work in silence. Some of these songs really just speak to the heart and it was a great album to listen to.

Why did he write, make, and publish this album? He started writing his first song “Riptide” in 2012 while he was playing football in Australia, and had a job gardening. But he said in his interview with KROQ (Also known as The Kevin & Bean Show), “When I launched ‘Riptide’ on the internet, it went viral and people were telling me to make a follow up album, but I didn’t have a band. So in result, I got a band together and they are now some of my best friends. Once we had a few meetings we started writing and made the album. I made a lot of the songs the same. For example, when I made ‘Mess Is Mine’ I made half of the song and got stuck on the other part of it but when I was listening to different songs and artists the other part came to me and I put the two together and the song came together.”

After listening to the whole album, none of them were super boring and none of them had lyrics that weren’t interesting. All of the lyrics sounded like he was trying to write a book but in song format. What I got from the first half of the album is that a lot of songs and lyrics were about love, and different stages of love. Some of my favorites are “Wasted Time”, this song represents the feeling of being with someone who could have someone much better. His hit song “Riptide” was just about his childhood and how he grew up. “Who am I” was a song about trying to find yourself without having your loved one right by you. “From Afar” was one that really spoke to me and will speak to a lot of other people. This song was about loving someone you can’t, so you have to love them from afar. “Georgia” was such a good song. The moral of the song was him describing the love and flame between him and his partner even after they ended everything. “First Time” was Vance Joy describing his first time falling in love.

My favorite song on this album has to be “Mess is Mine”. The reason why is because it also just has such a great tune and it also has amazing lyrics. “Mess Is Mine” is about when you are in love with someone you should expect to get the entire package. My favorite lyric in this song is “Bring me to your house, tell me, ‘Sorry for the mess’ Hey I don’t mind.” That really just shows that your lover should expect and take you for who you are. This song was just so beautiful.

Vance Joy is such an underrated artist and so many people know him as the guy that made the song “Riptide,” but he is so much more than that. When I interviewed my brother, Isaac, I asked him the question, “Have you ever heard of the artist Vance Joy and if so have you heard his song ‘Riptide’?” He then responded with, “Yes I have heard of Vance Joy and I have heard of the song Riptide a couple of times on the radio.” Later in the interview I asked him if he enjoys listening to Vance Joy and any of his songs and he came back with, “Yes, whenever it comes on the radio I always sing to the song, it is such a feel good song.”

In conclusion, Vance Joy is well known but only for his one song. So hopefully after reading this article you go and give his album a listen. Or just go back and find the songs where you can relate the most to and just give them a listen. Other than “Dream Your Life Away,” Vance Joy has another album “Nation Of Two” which, just by the name, I’m already intrigued. So with hope you go and listen to his album without skipping any songs because this really is one of the best.