Iconic Looks at the Met Gala 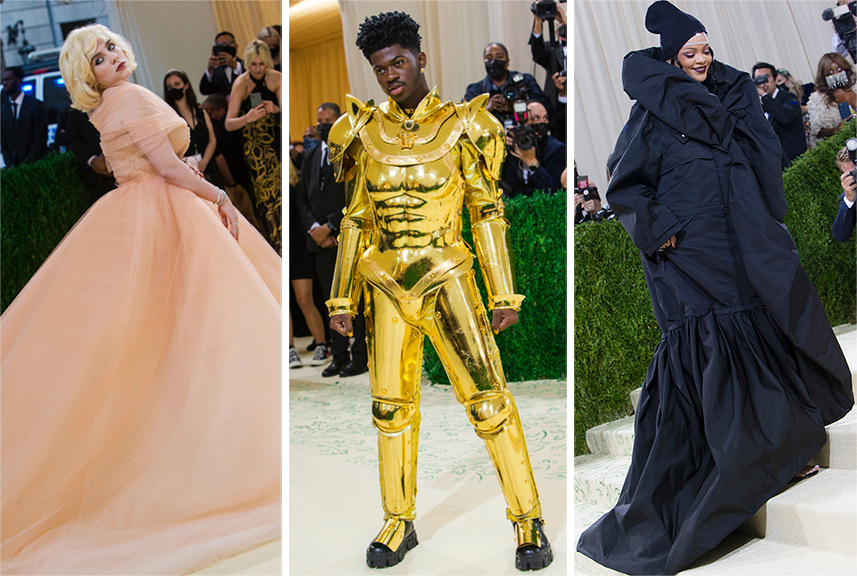 There was a whole lot of controversy going around about what celebrities wore to this year’s Met Gala. The theme for this year was “In America: A Lexicon of Fashion”. Many celebrities sprouted onto the red carpet and completely demolished the theme. With AOC’s tax the rich dress, Lil Nas X’s golden one piece, Billie Eilish’s gorgeous gown, and Addison Rae’s red dress, I will be talking about each of their pieces and my view, as well as other’s views on their outfits.

Starting off with AOC’s white gown, many people were confused with this look. Her dress states “Tax the Rich”. While she’s at the Met Gala where an individual ticket costs $30,000 just to get in, and over $200,000 for anything else. One person said on Twitter, “If AOC hates the rich so much, why is she attending an event that only the wealthiest people in America can afford to attend?” Many people were confused with this.

Due to the title of the dress, many people went crazy over it. It has been a popular saying lately so it managed to catch many people’s attention. I’m not sure if I should like her gown or dislike it. I completely agree with what AOC is trying to say to us, but why would someone who is wealthy herself stating something like that while attending one of America’s most expensive ceremonies? I’d also like to include how she went with the theme of the Met Gala, but also went against it. That was pretty cool.

The myth, Lil Nas X. Not everyone is a fan of this man, and people were upset with him attending the Met Gala in general. Nas does not let any negativity get in his way, he tends to let it lift him up. His pieces said a lot about him if you were to pay attention. His first piece was a huge golden cloak. He really did look like he was royalty. Lil Nas states, “We wanted to start with royalty, you know. Or like, a cloak … like we’re in our shell”. Keep in mind, “like we’re in our shell”. His whole clothing transition will make sense towards the end. Once he takes off his cloak, he reveals another interesting but gorgeous golden one piece. He looked like Tin Man from Wizard of Oz, but gold. Whilst he is taking off the cloak, Nas mentions, “And then we break out of it a little bit more … It’s kind of like me, when I got into the industry. No one knew who I was”.

What Nas is saying in this interview is really important, sweet, and straight up. Another important thing Nas had to say about his golden piece. “It’s like I built this shield around myself … I came out, and this year, I feel like I REALLY came out.” All of his pieces meant something important to him. In the end, he took off the shield to reveal himself, being open to absolutely everyone. He was confident and brave enough to share his story and to share himself being vulnerable in front of thousands if not millions of people.

As we’re getting to the end of this article, I would like to shift from Lil Nas X to Addison Rae. This was TikTok influencer Addison Rae’s first time at the Met Gala. How exciting! She showed up in a bright red gown by Gucci. May I say, I genuinely believe that she didn’t deserve to be at the ceremony. Although you’re able to show up if you bought a ticket, I believe everyone else there had a reason, and then she just showed up.

Addison Rae shares with us her reasoning behind the dress. She was inspired by old but well-known American celebrities such as Marilyn Monroe, Julia Roberts, and Britney Spears. Each of these inspiring American actresses wore a signature red dress, which Addison decided to hop on board with.

Several people joked around on Twitter a lot when they saw Addison was actually attending the Gala. People thought she was borrowing the dress from a close friend, Kourtney Kardashian, which she wore for Christmas. The dresses do have similarities and it makes sense since they are friends. People on Twitter left a handful of comments such as “I genuinely thought Addison Rae going to the Met Gala was a joke” to “Addison Rae calling a 2003 dress vintage hurt me more than I care to admit”.

I asked a student attending Pitman High, Hailey Ware, “What was your initial reaction to everyone’s outfit on the red carpet?” Ware responded with, “I was shocked when I saw Billie Eilish’s gown. It was something I never would’ve thought she’d wear.” I totally agree with her because, wow, was I stunned by Billie’s gown!

I also asked her if she were to attend this year’s gala, how would she show the theme.

Ware states, “I believe I would be able to take on the theme. My dress would be like AOC’s. I have a lot to say about what has been going on in the world lately, and her dress was pretty inspirational”.

Another interviewee I asked was my older sister, Adrienne Tobar. “Were you expecting these types of controversial outfits?” Tobar responded with, “Not really, but also a little bit … all the pieces were interesting and well-thought out.”

One last question I had for her was, do you believe half of the people deserved to be there? “Although you BUY a ticket in order to go, I believe a lot of people didn’t really have any reason to be there. All these new “Tiktok influencers” haven’t really done anything to help the younger generation the way others have. I don’t like how they really only seem to care about fame, compared to other celebrities..”

In conclusion, this year’s Met Gala was quite something. The theme was very strong and had various ways to show “In America: A Lexicon of Fashion”. Many celebrities and designers did an amazing job interpreting this theme onto their pieces. After viewing everyone’s pieces and their short interviews, how would you view the Met Gala? Everyone’s pieces were not only gorgeous, but unique and inspiring in many different ways.