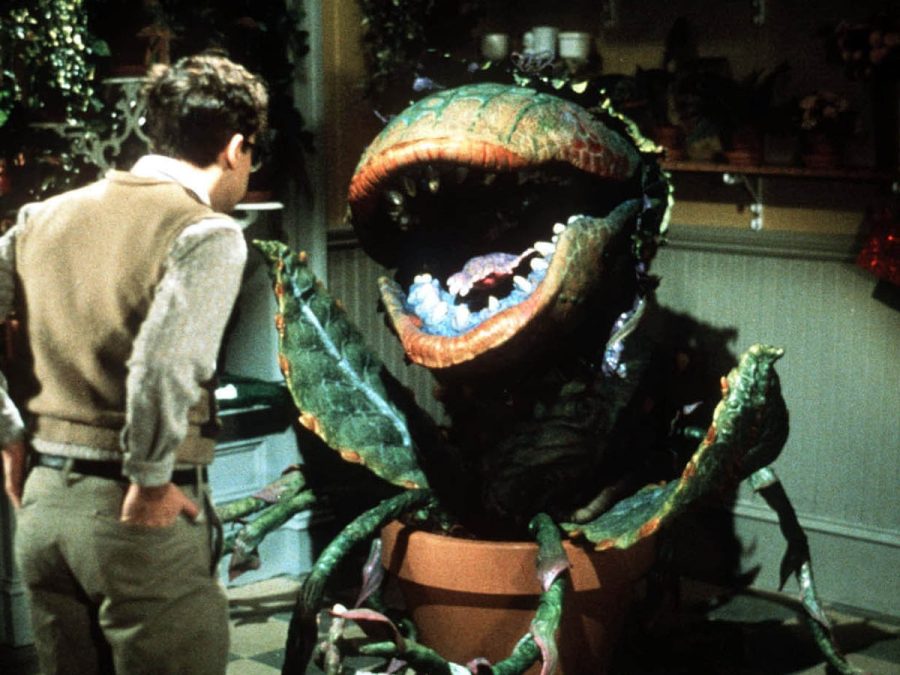 The Pitman High School drama department proudly presents its highly anticipated production of Little Shop of Horrors! If you’re like me at first, you’re probably wondering “what is Little Shop? I’ve never heard of it.” Let me tell you, it’s trippy; however, it is completely different from the other plays that have hit the Pitman High School stage.

Little Shop of Horrors is overall a story about a murderous plant that inevitably takes over the world. It’s the cutest little show! There are 4 overall main characters in the show: Seymour, a meek, orphaned florist, who purchases the plant (otherwise known as Audrey ll); Audrey, who is an easily manipulated, innocent woman, and is also a florist like Seymour; Mushnik, the owner of the previously mentioned flower shop, and a father figure to Seymour; and Orin, a sadistic dentist who Audrey is unfortunately involved with. There’s also a wonderful ensemble, and the Little Shop Trio, which are three lovely singers.

To give a brief explanation of the relationships between the characters, Seymour is hopelessly devoted to Audrey; however, we know that Audrey is in a relationship with the disgusting excuse of a man, Orin. I’m not going to give anything away, but the relationship comes to a pretty messy conclusion. Seymour is also the parent of Audrey ll. During a solar eclipse, he discovered this “fly-trap” that he definitely did not expect to… You thought I was really going to tell you? Haha, no. You have to come find out!

On another note, this is drama director Patrick Norris’ first production as the new drama teacher at PHS! As a student of his, I’m a bit biased to explain my respect for his visions; therefore, I asked senior, and four year drama student, Alyssa Evans, to give her opinions on Norris.

“I adore [Norris]! I think he is a great human and a great teacher, and he’s learning with us, and it is a very big adjustment for him but he is persevering and doing it so well!” says Evans.

I was able to get a few words from Norris on his plans for our already impressive show.

Why did you choose Little Shop of Horrors as your first show?

“I chose Little Shop because it is one of my favorite shows that I also felt aligned with Pitman’s drama department… The shows that I’ve always loved here have always been larger casts, good amounts of comedy, fun music, and then some sort of edgy twist, which I always feel is nice. So, I thought it was a good show for me creatively, and also for our department.”

The vision that Norris is preparing to showcase as Pitman High School’s first musical after the pandemic has already proven to be astounding. During our interview, he verbalized how he is so impressed with the work that has already been done in regards to set design, promotion, and all the hands-on assignments that he has assigned to the drama students. Norris also spoke on auditions, and how he was bewildered at the amount of talent that Pitman has, which made his job contradictingly easier, and more difficult.

Overall, Little Shop of Horrors is a musical that is most definitely worth viewing. Come out and support the arts, especially after not seeing a musical from Pitman ever since pre-pandemic. Vien Santiago, a freshman who sits comfortably as the lead role of Little Shop, explains why coming to the show would not be a waste of time!

“I think [everyone] should look forward to our awesome cast and set. After working incredibly hard, I definitely think it will be noticeably represented. Also, I think the way we integrate the Audrey II puppet alone would be a reason why to come to see the show because I already know it’s going to be so cool.” says Santiago.