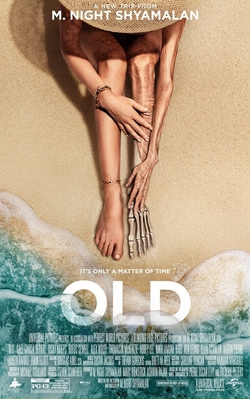 I’m not going to bother sugarcoating it…Old was horrible. Honestly, I had high hopes when entering the familiar building with my eager friends, as I had seen the trailer for the movie a few months back. I thought it looked interesting and my friends agreed, so we paid for our tickets and popcorn, and rode the roller coaster into the movie we had high expectations for. Spoiler alert: we were 100% disappointed.

Old is essentially about two families who get trapped on an island where time proceeds at an intense rate. They all begin aging rapidly and try their best to get a connection to the outside world to come rescue them. Seems like a pretty intriguing idea, right? Not to mention, the flick was directed, written, and produced by none other than M. Night Shyamalan; the same guy who has films like Split, the ever so popular The Sixth Sense, and my personal favorite, Signs. Needless to say, when seeing his name attached to this movie, I was astonished at the approach that was taken to display his vision. 10/10 would NOT recommend.

Rotten Tomatoes has given this movie 50% and that’s honestly generous, in my personal opinion. Don’t believe me? Then maybe you’ll trust Bella Green, a senior at Pitman who has also attended Old.

Is this movie one you would watch again?

Was there something in particular in the movie that helped you come to this conclusion?

“There was a point when I realized there was no depth in the movie. The plot structure was so messy and confusing, I couldn’t even pretend to know what was going on. As soon as I figured out that the movie was two hours long, I knew I couldn’t bear it anymore; it just kept going on and on… Also, the camera work was so bad. I get they wanted to be all artsy and stuff but it ended up just making me cringe.”

So if I asked you to describe this movie with one word, what would you choose?

Did you have a favorite character in the movie?

“No one. They’re characters were so off-putting and annoying, like… there was honestly no character structure at all.”

That being said, was there a specific actor or actress that you think shined in the movie?

“If I had to choose I liked [Alex Woolf] the best but only because I’ve seen him in other things before. Genuinely, I feel like they’re all probably good actors in other movies but with this script… honestly, I just didn’t believe them at all, and I’m pretty sure it’s because even they hated the script.”

I honestly wouldn’t doubt it. So lastly, if you were a movie critic, what rating would you give this movie out of 5 stars?

Overall, the movie is not worth the $12.50, and that is a guarantee; it got old really quickly (pun intended). I will say that it gave me and my friends a good laugh, though; not due to humor, but rather embarrassment. If you haven’t had a good cringe in a while, then by all means, enjoy yourselves, but don’t say I didn’t warn you.