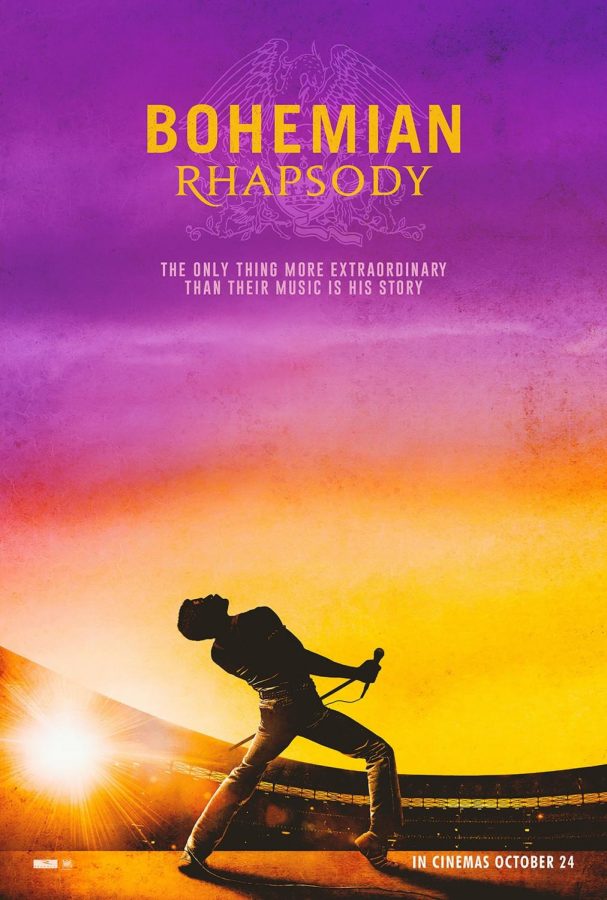 You have to face it, musicals are an interesting movie genre, but oftentimes can be kind of boring and tiring to watch. I’ve rewatched many musicals over and over again just to get the feel of actually being there and enjoying the music while it’s happening. I’ve watched Bohemian Rhapsody over 50 times! I’ve memorized almost every line and can quite literally act out the movie. I’d never expect myself to go crazy over just watching a normal musical. I love listening to music, especially 80’s rock so when I was informed that this movie was coming out, I was beyond excited!

To help get this amazing conversation flowing, here’s the background of this movie.

Main character, Freddie Mercury/Farrokh Bulsara (Rami Malek) wishes to be a rockstar at a young age. His parents are kind of iffy of his new career choice. He goes out to a club because there is a band there, Smile, which he finds amusing and is hoping he can try to get into the band himself. While he is there, he meets this girl that he can’t get his eyes off of named Mary (Lucy Boynton). Without Freddie’s knowledge, the band’s lead singer decides to quit because he believes the band isn’t going to get anywhere.

Right after, Freddie meets up with the band asking if he can join it. The members laugh at him because of how his teeth look. He then shows them what he can do and they were amazed and let him into the band as lead singer. They go back on stage to perform one of Smile’s original songs but Freddie decides to sing his own. Obviously awkward and nervous, he wasn’t sure how any of the equipment worked, in which he made his signature move, the fist to the sky. Everyone in the crowd was making fun of him because he dressed feminine and they were upset because they missed the old lead singer. He decides to stay in the band and tries to fix it so they can get more shows in better places. After this, the new and improved band, Queen, finally takes a risk and goes places, and Freddie and the band’s new career goes uphill.

Even after watching this movie countless times, many of the characters still manage to tick me off, even just thinking about them. I never heard of anyone in the cast except for the original band members of Queen, Brian May and Roger Taylor. But they did a pretty good job selecting the roles. I’ve read several times online that many people were upset at how poorly they recreated how Freddie’s life actually was, but it really never bothered me.

This movie made me realize that I truly do enjoy watching musicals. I grew up watching Disney movies and they often had singing in it. Some of my favorite movies are Tangled, Moana, Princess and the Frog, Frozen I and II, Hercules, and many more. All those movies have many songs. Also because of Bohemian Rhapsody, I was obsessed with Queen. It helped me realize how amazing music really is!

To gain more of a view on how other people felt about this musical, I asked Lexie Addington (11th, Pitman High School)l, who has also watched it very many times, a few questions.

“What was your opinion the first time you watched this?” When asked this question, Ms. Addington responded with, “I really enjoyed how accurate many of the characters were. Even their appearances were spot on. I also liked how the creators decided to start with Freddie’s fame and then show how he and the band got their way to the top”.

“How did you feel when the film showed you how Freddie’s father didn’t support his lifetime dream?” Addington replied with, “I’m glad Freddie was able to accomplish his lifetime dream of becoming a rockstar since he was able to prove his dad wrong. But, his dad was also right because it was an unrealistic dream that had almost no chance of happening”.

“Would you recommend this music to others? Why?” Lexie said, “Yes, I would 100%. It’s a good story with good acting. It’s like a documentary that doesn’t go like an original documentary. It’s part comedy and it includes popular songs that many people can sing along with. It also informs the audience how hard it was back then for homosexuals and the dangers of STDs. It includes how expensive and hard making music was back then because everything was so limited”.

Overall, I do say that Bohemian hit that spot of entertainment. It was an interesting movie, informational but not boring, and super exciting to watch. I loved listening to the songs in the movie. Many of them became my favorites. Although I didn’t know anyone in the cast, I do believe the directors chose amazing people to play everyone’s part!