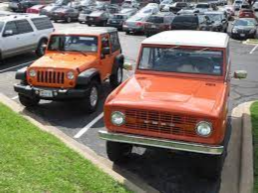 Since the resurrection of the Ford Bronco, people have been asking if this is the Wrangler Killer that Ford enthusiasts have been looking for. With great on- and off-road capabilities, it seems like it might have a chance. But that’s not the Bronco or Jeep I’m here to talk about.

Flashback to 1985, the Jeep cj7 has been out for close to 10 years, and the Ford Bronco has been in production since 1966. The cj7 is the bigger and more comfortable counterpart of the cj5, and the Ford Bronco is on its third generation, with many upgrades making it more comfortable both on- and off-road. At the time, these were the best off road SUVs on the market, aside from the Chevy Blazer. The Chevy Blazer, however, has left the offroad scene behind by becoming a standard crossover family car.

At the time, the big question was, which SUV is the best for off-road capabilities, Jeep or Ford? The answer isn’t exactly straightforward, there are a few things that can be easily compared between the two.

Starting off with our suspension, the Ford Bronco had the more updated suspension at the time. With independent front coil spring suspension, it made for a much more comfortable ride both on and off-road. It did have a solid rear axle design, which made for much better articulation than independent suspension.

Freshman Jacob Costa states that in the suspension category, “The Jeep likely had better articulation and the Bronco was more likely to roll-over.” Which gave his vote to the Jeep.

The Jeep had solid axles front and rear, along with leaf springs at all four corners. The solid axle design gives much more articulation than independent suspension, but it can sacrifice comfort because when one tire goes up the other must go down. Good for crawling over rocks and such, but not great for road comfort. Additionally, the jeep has leaf springs which can limit suspension travel. However when AMC was designing the suspension, they used lighter duty springs, meaning that they are much softer than most leaf springs, helping suspension travel.

The Jeep had only 2 engine options in 1985. The optional 2.5L 4-cylinder, a fairly reliable yet underpowered engine offering decent fuel efficiency. The other option was the beloved 4.2L 6-cylinder, a very reliable engine, which pumped out approximately 120hp. We’re not going to talk about the fuel efficiency of the latter engine though.

Now I want to point out that the Jeep and Bronco had very differently powered powertrains, with the Bronco overpowering the Jeep with every engine option. However it is important to note that the 3rd gen Bronco’s weighed around 4,373lbs, whereas the Jeep cj7 weighs around 2,700lbs. All this means is that the Jeep doesn’t need as much horsepower to go the same speed and distance as a Bronco.

Freshman Jacob Costa, however, states that “The Bronco has more options, which makes it more customizable and therefore better off-road.” A great point.

Third we are going to look into the transmissions of these two vehicles.

In the 1985 Ford Bronco, you had two options per engine. You could go with the three speed automatic transmissions, or you could opt for the four speed manual transmissions. Either way you were going to get a good transmission, that was made for the power output of the engine.

Next we’re going to talk about size. Dimensions that is. The Ford Bronco, while still being considered a small SUV, is actually quite a bit larger than the CJ in almost every dimension. It has a 104 inch wheelbase, which is about on par with today’s sedans. Overall length is 177 inches, a healthy size. It is an astounding 77 inches wide, which equates to approximately 6 foot 5 inches wide. It is also a fairly tall vehicle at 72.9 inches tall, with a healthy ground clearance of 9.2 inches in stock configuration.

The Jeep cj7 is smaller overall, which can help and hurt on- and off-road performance. The wheelbase is a meager 93.3 inches, with an overall length of 148 inches. It is almost three feet shorter overall than the Bronco. The cj7 is narrower too, at 68.5 inches. It is slightly shorter in stock form as well, at 67.7 inches with a ground clearance of 6.89 inches.

The Jeep cj7 is overall a smaller vehicle, which can be helpful offroad but would hurt on road handling and space. If you have things to carry in the back you’d be hard pressed to find space, and if you have any friends they’d have a hard time fitting in a Jeep.

Finally, angles. Arguably the most important things in the offroad game, your approach, breakover and departure angles determine what you can climb without damaging your vehicle. Your approach and departure angles are merely the angle from the base of your tire to the furthest point either in front or back depending on which angle you’re looking at. Your breakover is a little bit more complicated, but it basically means that the more breakover angle you have the lower your chance of getting high-centered.

The Ford Bronco going first has an approach angle of around 24.1 degrees, not terrible but definitely not great. The departure angle of the Ford Bronco is a measly 20.6 degrees, which is hurt because of the rear overhang of the vehicle. The breakover is a fairly respectable 20.2 degrees, but it could be much better if the bronco retained ride height and shortened wheelbase. Overall, the angles of the Bronco are nothing to scoff at, but are not the most impressive.

The Jeep cj7 on the other hand is quite impressive. With a 45 degree approach angle, you can approach most rock with it, and this is before any modifications. The departure angle is also impressive at 30 degrees, because the cj7 does not have my rear overhang. Finally, the cj7 has 27 degrees of breakover, another respectable number from the Jeep cj7.

Overall, it depends on what you are looking for in a vehicle. Both are great off-road, but the Bronco is more optimised for Baja races and on-road performance whereas the Jeep cj7 has been optimised for off-road and utilitarian uses. The most solid off-road vehicle between these two though is the Jeep cj7, based off of the angles and sizes. The Bronco is more likely to be damaged, drag or rub on the trail, along with the chance of being high centered due to a low breakover angle. The cj7 is smaller and more nimble of trails, with a tighter turning circle due to shorter wheelbase, it would be easier to maneuver on trails. If you are looking for a daily vehicle that has good on-road performance along with being capable off-road, the Bronco is likely the better option for you.

Jacob Costa states that while the Jeep might have better articulation, “comfort is the most important thing” and the Broncos Independent Front Suspension is definitely the more comfortable of the two. The Ford Bronco also has room for your friends and family, which is an added bonus.