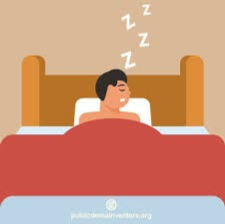 5:30am rolls around and most teenager’s alarms start going off. Waking up for school can be the most dreadful part of the day for teenagers. To wake up early and then go to school for about 7+ hours is tiring. Of course, no one wants to wake up early, but are there real reasons we should consider a later start time?

Though teenagers and their sleep habits may be maddening to parents, they’re partly in response to physical changes that occur during puberty. “Teens experience a natural shift in circadian rhythm,” says Johns Hopkins sleep expert Laura Sterni, M.D. “This makes it more difficult for them to fall asleep before 11 p.m,” says Hopkins Medicine. So with going to sleep at the earliest of 11 pm we can assume teenagers would also need to wake up later as well. Along with things like homework, sports, clubs, and family, teenagers are fairly busy.

While interviewing a family member, Yareli Mendoza, a freshman in high school, she says, “I honestly think having that extra time in the mornings could be really beneficial because I would not be as tired during the day. I feel like I would be able to focus more because I wouldn’t be focused on trying to keep myself awake.”

Teenagers need roughly about 9 hours of sleep to be well-rested for the day. Because of this, we can assume if most teenagers wake up at around 5:30 they would need to fall asleep by around 8:30. For many teens, their night is just starting by 8:30. “Studies have found that many teens have trouble falling asleep that early, though. It’s not because they don’t want to sleep. It’s because their brains naturally work on later schedules and aren’t ready for bed,” according to Kids Health.

Interviewing a fellow sophomore student from Pitman, Rosa Ochoa she said, “I usually go to bed at around 11:30 but if I have more homework that day then maybe around 12:30.” When asked the question: “What would you do with the extra time?” Ochoa stated, “Well I usually wake up at around 5:30 because I take the bus so I can’t miss it. With the time I would use it to actually eat breakfast, sleep in more so I am not as tired, help my mom with my siblings in the morning, and do any catch up on other things I need to do.”

Just for the sake of this article let’s say school would start at around 9. Even that would be extremely beneficial to students. If students went to bed at around 11:30 pm and woke up at 7:30 am for school that means they would get around 8 hours of sleep. Student Life EDU says, “Sleep plays a key role in helping students fix and consolidate memories, plus prevent decay of memories. Without sleep, people work harder and but don’t do as well.” It doesn’t take much to realize the less sleep you get the less efficient you are throughout the day.

So it is no shock that we find students sleeping during class because they stayed up all night doing homework. Students just need that extra time to rest. While they might get the weekends, 2/7 days of getting decent sleep is not enough. It’s almost every teenager’s nightmare to hear their alarm clock go off, so we should help them out with a later start.